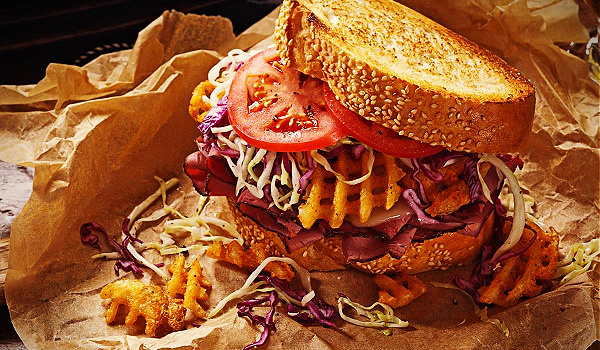 Feeling sad you missed out on the big money making run up in crypto? Outbid for that digital art NFT? Not invited into that SPAC that just merged with Elon Musk’s spaceship? Well, don’t despair. There is HUGE money in New Jersey delicatessens. You heard correctly, New Jersey delis, like in pastrami on rye with a side of chips.

In case you haven’t heard, a New Jersey deli company………Hometown International……….was recently de-listed from the OTCQB over-the counter-market AFTER achieving a market valuation of $100M. So what’s the big deal? I mean GameStop went from, like $20 to almost $500. Cryptos and non-fungible tokens have gone straight up. So what’s the problem with Hometown International getting to $100M? Nothing I guess, until you realize that Hometown International is only ONE (1) deli in Paulsboro, New Jersey. Yeah, but for that valuation I’m sure they must sell a lot of tasty sandwiches, right? Uh, no. Sales over the last two years? A combined $35K. (How can you have a bad deli in N.J…..geezzzzz?)

Now it appears the story was that Hometown had visions (drug-induced?) of becoming the Starbucks of delis. Locations worldwide. Chinese pastrami on rye. And to achieve those lofty dreams, Hometown had a crack management team, right? Well, kind of. Hometown International’s CEO is the principal and head wrestling coach at Paulsboro High School, which is located near the company’s “Your Hometown Deli” near Philadelphia. He also holds common stock and warrants totaling 30.5 million shares. The stock traded as low as $4.75 per share last year and was recently quoted around $13 a share so perhaps he should give up the school job.

Other than the wrestling coach/deli CEO, most of the company’s shares are held by two sets of entities in Hong Kong and Macau, China. One of the entities, and key investor, is Hong Kong-based Tryon Capital, owned by a father and son. And guess what? The firm has a $15,000 per month consulting contract with the deli’s owner. Hmmmm! $15,000 per month from a deli making $17,500 per year. That math just doesn’t work. So, a dad and son from China walk into a deli in New Jersey and……oh, stop me if you have heard this before (lol).

Certainly something just doesn’t smell right (not the pastrami) and running a stock up smacks of manipulation (pump and dump). So you are probably thinking the cheap stock police are on the job. But no. Seems the regulators were tipped via a warning to retail stock customers in a client letter by hedge fund manager David Einhorn. Yup, not the SEC or the OTC Markets Group “unusual activity” police, but Greenlight Capital super hedge fund manager David Einhorn. Maybe David can get a reward, like a bounty hunter.

Again, you are probably thinking those Chinese guys and the wrestling coach at Hometown International are in deep doo doo, right? Well not exactly. The CEO of OTC Markets Group, tweeted last week: ”$HWIN Delisted from OTCQB for not complying with the rules and marked CE for public interest concerns.” Oooooo! They didn’t play by the rules and they have to wear a scarlet letter with CE on their sweater (The acronym “CE” stands for “caveat emptor,” the Latin phrase that means “buyer beware.”). So that’s it. Slap that hand. Oh, the shareholders? Maybe they will get coupons good for deli sandwiches for life.

So if you have missed all the other big movers in the market lately, keep an eye out for some well dressed Chinese stepping into your local deli. It’s a can’t miss.