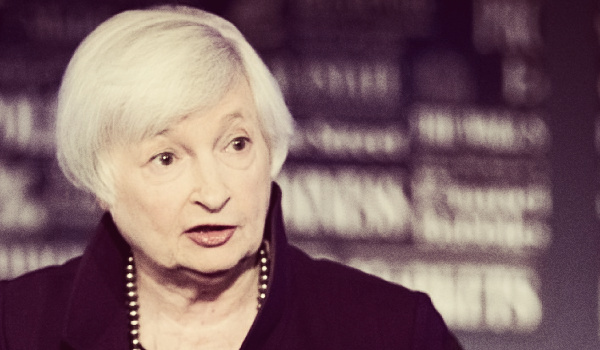 You think you have problems? Try being Janet Yellen. Yes J-Yell, the new U.S. Secretary of the Treasury, certainly has her hands full. She is attempting to convince investors that printing gobs of money is non-inflationary and also convince global nations that joining the U.S. in raising taxes is really good for them. OK then. But her biggest hurdle? Trying to create fear in owning crypto and, in particular, Bitcoin. Fearmongering, if you will.

So why would the Secretary of the Treasury want to attempt to scare people away from Bitcoin? Mainly because (pick one); 1) They don’t know how to regulate it; 2) They fear losing monetary control; 3) They need time to catch up after years of technology neglect; 4) All of the above.

Well now J-Yell has been instructed to FIX IT! Since she was Chairwomen of the Federal Reserve a few years back, a whole lot has changed. Bitcoin has gone from roughly $3,500 to recently over $60,000, banks and institutions have embraced crypto trading, corporations are now holding Bitcoin in excess cash reserves in lieu of treasuries AND Bitcoin is gaining more and more acceptance to pay for goods and services.

Well, seems the T-Secretary does have a plan. Kind of, anyway. Convince everybody that Bitcoin and crypto is used by evil-doers (a/k/a criminals) for illegal and illicit activities. Also, it’s “bad for the environment” and its volatility makes it to risky too be considered a workable currency. Sorry J-Yell, nice try but ONE PROBLEM. None other than the CIA (yes, the Central Intelligence Agency) has concluded that Bitcoin is not used for illicit activities (money-laundering, drug deals, etc) nearly as much as “regular” banks. Former CIA Director Michael Morell just released an independent paper and extensive study concluding; “The broad generalizations about the use of bitcoin in illicit finance are significantly overstated” and that “Blockchain analysis is a highly effective crime fighting and intelligence gathering tool”.

Additionally, the study showed the percentage of illicit transactions in crypto is minimal (less than 1% according to one report from Chainalysis), and falling. For additional context, the study notes that estimates of illicit activity conducted through traditional intermediaries range between 2-4 percent of global GDP. Well snap. There goes J-Yell’s criminal activity Bitcoin bashing plan. As for trash talking Bitcoin’s effect on the environment? Sorry, I am not going down that trail.

So, that leaves Bitcoin’s volatility. The T-Secretary does have a small opening to spread her “Bitcoin/crypto is evil” plan though. Noting the recent activity in the stock of GameStop, J-Yell started a Reddit chat forum called “TreasuryBetsBig” and using the handle “Meowing Kitten” started a fear Bitcoin discussion (Regulators will find you; Bitcoin will wipe you out financially……maybe; how BTC causes Covid, etc). Brilliant. Fearmongering on steroids. Perfect way to create volatility and fear of losing money.

Just the government arriving to help you.

(And for the record, that last paragraph is in jest)