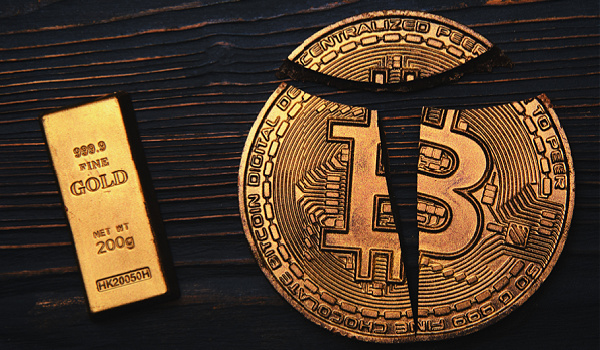 OK, so all that is in the past and water over the dam say the gold fans.
What about now and in the future? Coming across an article from our friends
over at Kitco News citing a report by Goldman Sachs (commodity analysts) that
gold will be a better bet than bitcoin in 2022, I thought that very
interesting. Seems every time bitcoin has a pullback or pauses the “it’s
going to zero crowd” comes out and the gold fans jump and down touting
gold. Hence the Bitcoin vs Gold debate flares up. Why? Gold is so last 5,000
years and bitcoin is so NEXT 5,000 years.

So, on a risk reward basis which is the better choice? It certainly depends
on how you choose to define ‘risk’ and ‘reward.’ Before gold became a relic it
was the go to choice in times of uncertainty. It was the store of value and
safety. But what about a reward? Uh, not so much. Now along comes bitcoin, the
new store of value and it offers reward. Sure, a bigger risk too but bigger
rewards. Gold sits, bitcoin rocks. The Goldman analysts view gold as a risk-off
inflation hedge and bitcoin as a risk-on inflation hedge. Really? Should
inflation run 5% and gold holds value or increases 5% where’s the reward?
Should inflation run 5% and bitcoin increases 10%-20% (or more) that is reward.
Again, consider what risk tolerance is appropriate but holding a stagnant
non-productive asset (aka gold) is really not a good plan.

Sorry Goldman, in an environment like today’s (chaotic? crazy? bizarre?) the
better choice is bitcoin. It’s really hard for gold fans to accept, but
airplanes no longer have two wings or propellers, telephones no longer have
rotary dials and bitcoin has replaced the shiny metal. Risk reward? Bitcoin.
Store of value? Bitcoin. Bitcoin vs Gold? Bitcoin.