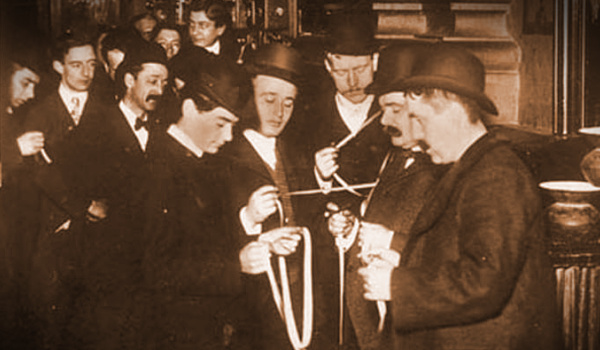 FROM THE PUBLISHER: In this new column, Digital Wealth News features the thoughtful meanderings of history and technology in the financial markets under the pen of longtime market industry veteran Rob McHeffey. We start at somewhere near the beginning with the launch of the ticker tape machine and in future weeks and months, we’ll go from there! Enjoy!

The Universal Stock Ticker Tape machine invented by telegraph pioneer Thomas Edison was used on the NYSE and The Philadelphia Stock Exchange beginning in 1870 until Nasdaq “creatively destroyed” the ticker tape after a century in use to form the first ‘electronic’ exchange in 1970. The technological disruptions to follow from the Crash of ’87 to now are profound to say the least.

As recent as 2007, the maximum limit that a trader could hit or take off the NYSE specialists’ book electronically, was 1,099 shares, even if there were 100,000 shares shown or ‘out loud’. With the advent of Rule NMS and hybridization of ARCA (a P-coast derived ECN or electronic communication network) and the NYSE, it was made possible to transact via an ECN (Instinet, ARCA, B-trade etal) any desired amount on the ‘screen,’ which is beneficial to all investment managers. The antiquated DOT (direct order trading) system not only limited transaction size, but greatly increased market impact, timing risk and performance slippage. DOT enabled traders to only transact up to 300 shares that is until SUPERDOT ‘allowed” a maximum of 1,099 shares to be automatically executed. That said, the Rise of the Machines has made trading more efficient with faster execution times and lower error rates.

Following the crash of 1987, firms like Instinet and ITG led the way to drastically improve liquidity with state-of-the-art disruptive electronic trading capabilities as Broker/Dealers and institutional clients were flocking to these Fintech innovators. Volumes exponentially soared and spreads tightened, greatly improving liquidity and transaction efficacy for portfolio as well as single stock trading and crossing, with full anonymity.

As quantitative and statistical arbitrage investment management strategies flourished in the 1990’s, so arose the demand for transaction cost analyses and the advent of algorithmic trading, pioneered by ITG Inc,. Early on, the demand was mainly for TWAP and VWAP execution strategies, also called participation algorithms. The logic was to ‘spread out’ the trades in lieu of putting on a large block trade, which is highly beneficial to the manager but often times creates uninvited noise. VWAP, or volume weighted average price and TWAP, or time weighted average price, was the standard trading procedure for most quants, and ‘average’ executions were acceptable to most portfolio managers. At this point, the arguments shifted to why seek mediocrity?

The demand was now set for sophisticated implementation shortfall strategies which were introduced in the techno-roaring 1990’s as well, replicating how a seasoned professional trader opportunistically executes a trade or basket of trades, based on decision price, or that price the PM decides to trade. Thus was the advent of the efficient disruptive trading frontier, introduced by Robert Almgren and Neil Chriss in “Optimal Execution of Portfolio Transactions, 2001”. This development showed the relationship between market impact and timing risk, that is, low timing risk invites aggressive trading and conversely, minimizing market impact increases timing risk and passive trading.

The implementation shortfall type algorithms created were coded by creatively disruptive programmers to first and foremost mask all trading intentions and to limit market ‘footprints.’  This was achieved by randomization (mixing up wave share amount so to not flag orders), altering broker codes, blending into the market not exceeding average tick size, sweeping ALL markets instantaneously for hidden liquidity by IOC (Immediate or Cancel), and utilizing dynamic volume and intraday volatility predictors to avoid chasing market ‘spikes’ or anomalies.

Over the past decade, there have been positive  enhancements in latency and sophistication within the existing fintech trading vertical, but not a significant innovative technology other than the implementation of Artificial Intelligence (AI) and the influence of the Meta Anti-Social Media. The Market is anxiously awaiting  the next Creatively Disruptive moment for the benefit of all investors.

Robert McHeffey is a 35 yr electronic trading veteran working for many top tier innovative broker dealers as well as running his own market neutral hedge fund in the mid 2000’s.

He holds firm on two mantra’s 1) “An expanding mind rarely returns to its original form and 2) Keep everything as simple as possible, but not any simpler.” Albert Einstein