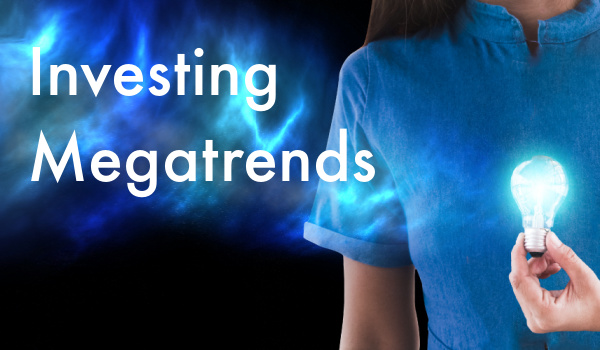 Thematic investing is gaining in popularity as people search for the next big thing in equity investing, and advisors are getting on board.

“Megatrends themselves are BlackRock’s view that comes informed by the indexing business active management, the BlackRock Investment Institute, and others in 2016, when we asked and tried to answer what are the superhighways to the future that investors need to pay attention to?” said Spiegel. “Megatrends are not investible themselves but become like guideposts for us.”

Technology breakthroughs can mean a lot of things, including software, hardware, and new ways of connecting and engaging technology.

“A lot of what we’re excited about in addition to those more software-based areas are hardware areas like robotics, self-driving and automation,” he said.

There are two main demographic trends Spiegel and BlackRock are watching. The first is aging.

“In the next decade, now more like in the next nine years, there will be more grandparents than grandchildren in the U.S. for the first time,” he said. “There will be more people over 65 than under 18, and a few years later that will be true around the world.”

Aging populations will not only spend more money on healthcare, but also drive new innovations in healthcare, said Spiegel.

On the other end of the spectrum, successive generations of young adults – millennials are currently being supplanted by Generation Z – are becoming more conscientious consumers. Today, most Americans ages 18 to 34 are willing to pay a premium to access environmentally-sound “green” goods, said Spiegel.

Rapid urbanization may seem to be a trend muted by Covid-19 as people fled major cities to avoid falling ill, Spiegel acknowledged, but it has continued more or less unabated.

“By and large, the people who left places like New York and San Francisco didn’t move to a place like rural Montana, unfortunately,” he said. “Instead, they moved from New York to Atlanta, or from San Francisco to Salt Lake City.”

The shift has occurred mostly from large metros to smaller ones, or from urban cores to the suburban or exurban parts of a metropolitan area. In economic terms, the infrastructure burden is moving to different urban and suburban areas, but it is not relenting.

The recent Russian invasion of the Ukraine served as a proving ground for clean-energy ETFs, said Spiegel, as clean energy product prices surged in the immediate aftermath of the attacks.

“As oil has crossed $115 per barrel, we saw an immediate response in clean energy… if oil is more expensive on a relative basis, then clean energy appears more attractive,” he said.

The bottom line is that recent gyrations are just that, said Spiegel. The U.S. is still at approximately 20% penetration of its energy production in clean energy, and most of that is accounted for by older orms like hydropower and geothermal. Investors should remain focused on the long-run case.

According to Spiegel, about 1-to-2 billion people will enter the global middle class over the next decade at a rate of 100-200 million people per year.

“90% of those people will be coming out of emerging markets, mostly in southeast Asia,” he said. “A lot of what we’re relating in this megatrend is a transfer of wealth, which in developed markets goes to millennials or Gen Z’ers, but also transfers wealth around the world towards countries where, frankly, extreme poverty is being replaced by more of a middle-class existence.”

The rise of this global middle class means new consumers with new buying behaviors, which will require supply chains to readjust to serve new places.

Over the long term, these trends should produce outside returns, said Spiegel, but over the short term this will be less true.

“Look at the performance of many of the thematic ETFs or megatrend strategies from 2018 to 2020, it looked like these things could only go in one direction,” he said. “Hopefully you realize nothing only goes in one direction.”

What Spiegel and his team try to deliver is the beta represented by each of these trends, which means they won’t go up or outperform the general market all of the time. If the theme has a period of struggle, the corresponding ETF should struggle as well – and trends will change over time, with some becoming more important while others fall by the wayside.

Electric vehicles, for example, encompass all five of BlackRock’s megatrends with links to environmental, generational, geographic, technological and urbanization themes, and have grown in prominence over time.

3D printing, on the other hand, was a major technological theme identified by BlackRock for its Exponential Technologies ETF (XT) several years ago at inception, but was recently omitted from that ETF’s index, said Spiegel as 3d printing proved “not as trendy as we thought.”

That’s why Spiegel says advisors need to integrate thematic ETFs into their current asset allocation and diversification strategies, and to diversify among themes as well.

“The most thoughtful way to incorporate megatrends into a portfolio is to actually just start a portfolio or pick the megatrends in a way that keeps your intended asset allocation in line,” said Spiegel. “Don’t take unintended bets in technology, on size, in sector or geography just by adding those megatrends securities in.”

By doing so, advisors may expose their clients to additional opportunities for equity returns without taking on additional risk within the portfolio.

“Any time you can add opportunity without increasing risk, that’s a free lunch in investing,” said Spiegel.