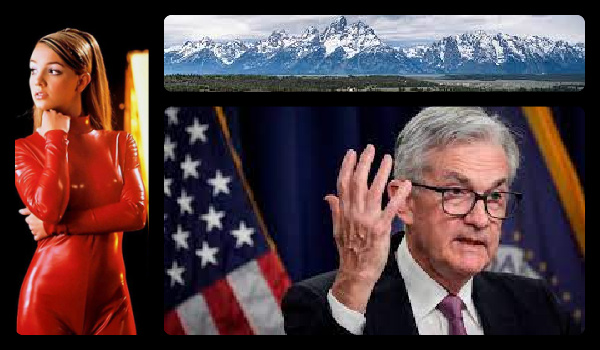 Of course the title comes from pop singer Britney Spears release in 2000 of her monster pop hit. The “I’m doing it again” part comes courtesy of Fed Chairman J. Powell. Yup, just like Britney Spears, the Fed Chairman is coming off HIS top hit of getting inflation back to 2%. And 4%. And 6%. And even 9%. Oops!

Looking back all the way to the 2008-2009 financial crisis, global central bankers decided to make sure that businesses, financial institutions and even governments would not be allowed to fail. Endless “unique” programs like Quantitative Easing (QE) became the norm with central banks buying risky assets and and encouraging investors to…….well, join them. A sort of buy now, pay later (BNPL!) and the Fed (and other central bankers) would make sure you really wouldn’t have to ‘pay later’, but rather, be rewarded. Pretty cool. Speculation with a backstop.

So financial assets rocketed higher with global banks taking interest rates to zero (and below), but economic growth lagged. What the hey? After experiencing stagnant growth with a “touch” of deflation, the world’s central bankers went on a quest to get inflation back up to the “magical 2%.” For years getting to the “desired 2%” rate of inflation became all consuming. Keep “free money” flowing and by gosh we WILL get inflation up.

Well, it worked. Way to well, actually. Now once again I must ask, since previous Fed Chair Janet Yellen (now Treasury Secretary) and current Fed Chair J. Powell went to really “smart” prestige schools (Brown & Yale-J.L. and Princeton/Georgetown-J.P.), did they not learn that if you have too much money chasing to few goods inflation WILL become a problem. Did they not equate that to how financial assets exploded all through the QE era? (Don’t like to brag, but I learned that at TCU-Texas Christian University-in Eco 101)

Now that we have gone through the “well, yeah, there is some inflation but it’s transitory” phase with global inflation really kicking living expenses butt, the “unforeseen inflation” is public enemy number one. And who better to fix it? Obviously the very ones who caused it. Yup, our own Fed Chair J. Powell and the usual group of central bankers just finished a symposium (brainstorming session) down the road from us in Jackson Hole, Wyoming. If they could ever experience inflation first hand, that’s the place (as if they actually pay).

So, after the Jackson Hole meeting last week, Fed Chair J. Powell declared war on inflation and vowed to “not let up” until inflation is under control and we can all be assured price stability will return. Okay then. If anyone can fix inflation, it just has to be the one one who didn’t even see it. Right?

If (IF) he and the global central bankers are as successful at getting inflation up with zero interest rates, how high will they take interest rates to get inflation down? 5%? 7%? How’s your pain threshold? Guess we will all find out, right?

To Federal Reserve Chairmen Powell and central bankers around the world;  “Oops!… I Did It Again”  Let’s hope not.