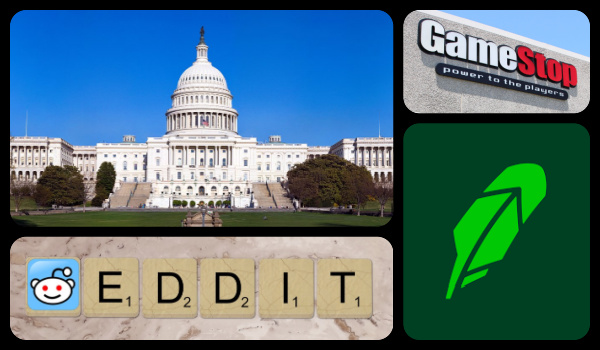 The all-star cast of witnesses included Gabriel Plotkin, founder of Melvin Capital, the hedge fund that needed a $2.75 billion bailout investment after getting caught in GameStop’s short squeeze; Vlad Tenev, co-founder of Robinhood, a fintech investing app catering to small retail investors, that was ostracized for freezing client accounts and limiting their transactions during the trading pandemonium; Kenneth Griffin, founder of Citadel, the financial firm that not only helped bail out invested in Melvin Capital, but also compensates Robinhood for its order flow business; Jennifer Schulp, a director of financial regulation studies at the Cato Institute, a libertarian think tank; Steve Huffman, the CEO of Reddit, a social media platform that seems to recognize the first amendment; and finally, Roaring Kitty, also known as Keith Gill, a self-made retail investor who exhibited no feline tendencies whatsoever at the hearing.

In order to provide clarity on the broader impact this hearing could have on retail investors, investment democratization and overall market direction, I’ve summarized and assessed the key takeaways drawn from the interrogations and testimonies. This way others need not suffer through 5+ hours of tech glitches, inaudible echoes, a lot of repetitive and senseless questions, the interrupting of witnesses, the reclamations of time, the misplaced campaign speeches, and some of the feigned outrage. This is my gift to you. You’re welcome.

The first thing that everyone should know is that despite its title, there was no real quest for winners or losers. Instead, and in what appears to have become the new judicial norm in America, last week’s hearing was primarily a pursuit of predetermined culprits based purely on politics.

Indeed, there were plenty of preconceived notions as to who bears accountability for the recent trading volatility as well as to the types of resolutions that should be enacted. Unfortunately, they were formed prior to any investigation and appear to depend primarily upon which side of the political aisle one sits.

With the exception of some bipartisan agreement concerning short selling abuses, the blame and resolution are split across party lines. Democrats, for the most part, want to hold Robinhood’s “Payment for Order Flow” revenue model responsible, and believe that greater order flow disclosures as well as a financial transaction tax would prevent situations like “meme stock mayhem” from occurring in the future. Republicans, on the other hand, feel that cumbersome regulation, particularly Dodd Frank, is the culprit and that the solution rests with regulatory easing and blockchain innovation.

The main points of contention are hashed out below.

If Robinhood’s “Payment for Order Flow Revenue Model” is responsible for anything, it is for driving innovation and helping bring industry-wide brokerage commissions down to zero so that retail investors can trade commission free. While not one legislator voiced (out loud, anyway) a desire to return to commission-based trading, some seem to advocate for greater transparency regarding payments for order flow.

Although I always tend to favor transparency, in this particular instance, there is no clear indication that it would provide resolutions or do anything to improve market structure. Increased order flow disclosures would certainly not harm retail investors, nor would it deter them from investing. However, there is also nothing to suggest that order flow disclosures would have prevented “meme stock mayhem” or that it would provide much benefit to retail investors at all.

It is important to keep in mind that stocks are a consumer product of which Robinhood is a retailer. In America, retailers are not required to disclose its wholesale costs to its customers. It is a mathematical given that in order for retailers to stay in business, they would pay substantially less for a product than its customers. It’s called capitalism. When I buy a dress at Bloomingdales, I don’t hear the salesperson say, “Mrs. Albright, I hope you enjoy that $300 dress that our buyers paid $150 for and our wholesalers spent $50 manufacturing.” That would be absurd. Consumers don’t make purchasing decisions based on supply chain economics.

Simply put, there doesn’t seem to be any necessity or urgency for greater order flow disclosures. Hence, there is no need to squander time and resources trying to construct a legislative band-aid for a wound that doesn’t even exist.

As Jennifer Schulp stated emphatically in her testimony, “there’s a lot of potential for unintended consequences here. And increased regulation can drive retail investors out of the market.”

Driving retail investors out of the market will accomplish nothing but exacerbate America’s retirement crisis and amplify the nation’s already harrowing wealth disparity.

If congress is so desperate to tax something, perhaps they should consider taxing themselves for the passage of destructive legislation. They can call it the Imprudent Legislation Tax.

What Can be Done to Curb Short Selling Abuses?

Everyone should be concerned about abusive short selling as it is a detriment to capital formation and job creation. Fortunately, this is an area where democrats and republicans, alike, seem to agree.

However, at the hearing, it was the long/short hedge fund and its “investor” who were reluctant to acknowledge a “short selling abuse” problem. The representatives of both Melvin and Citadel seemed pretty defensive when questioned about naked short selling. Plotkin flat-out denied allegations that Melvin had any naked shorts, stating, more than once, that their systems are structured in a way that always forces them to find a borrower for a shorted stock so it would be impossible for them to naked short.

Furthermore, Griffin indicated that short selling would not be an area ripe for regulatory adjustment. In fact, according to Griffin it wouldn’t even make the top 100 list of legislative priorities.

Nonetheless, GameStop’s implausible short interest ratio of 140% demonstrates an acute breakdown somewhere in the system which needs to be addressed, for the only way to achieve a short interest ratio in excess of the public float is if the same shares are being shorted in multiplicate.

According to Tenev’s testimony, “I do believe that the ability for the same share to be shorted an indefinite number of times is somewhat of a pathology, and that should be fixed. I think step one of that is modernizing the antiquated settlement infrastructure that everything is built on. We simply don’t have the ability to properly track what shares have been shorted and how many times as they’re moving through our settlement system currently.”

Rep. Warren Davidson, a republican congressman from Ohio, alluded to how blockchain technology could be used to curb shorting abuses by keeping accurate tabulations on shorted shares while Rep. Nydia M. Velazquez, a democrat congresswoman from NY, intimated the possibility of a “short position disclosure rule” when she questioned why institutional investors must disclose their long positions when they own 5% or more of the company’s shares, but no such disclosure is required for short positions. I believe that both of these proposals would be advantageous to investors as well as issuers.

In the meantime, the market doesn’t seem to be waiting for regulatory or technological solutions. According to S&P Global Market Intelligence, short positions in U.S. equities have sharply declined in the aftermath of the Reddit Rebellion. Apparently, suffering billions in losses has led hedge funds to reassess the risks associated with short selling. The beauty of free markets is that they often find ways to self-correct without any government intervention at all.

Dodd-Frank does indeed bear responsibility for the trading restrictions that Robinhood and other broker dealers placed on its retail clientele.

It is the Dodd-Frank legislation that mandates brokers post collateral with its clearing firm prior to the settlement date. According to reports, on January 28th, the clearing firm, DTCC, demanded significantly more collateral from brokers on certain “meme stock” trades such as GameStop. Some reports indicate that DTCC increased this capital requirement to 100%. Had it not been for this exorbitant capital requirement, trading restrictions would not have been necessary.

If one thing is clear, it is that Dodd-Frank has not stood the test of time. The profusion of fintech innovation is steadily obsoleting much of the statute. Accordingly, revisiting Dodd-Frank should be a top legislative priority.

Would Moving to Real-Time Settlement Improve Market Structure and Avoid these Type of Black Swan Events?

The short answer is yes. The longer answer is, “undoubtedly, yes.”

During the hearing there was some discussion as to the advantages of using blockchain technology to facilitate real-time settlement. Rep. Tom Emmer (R) discussed the importance in leveraging existing decentralized technology to provide real-time trade settlements, and affirmed that he and Congressman Stephen Lynch (D) would soon be reintroducing their bipartisan bill that would require the Securities and Exchange Commission to report on the feasibility, benefits, and costs of using a distributed ledger system (such as blockchain technology) in the clearing and settlement process after a securities trade is complete.

According to Tenev, “…if we were to have real-time settlement…there would be less of a need for collateral at clearing houses because the cash and securities transactions would be exchanged in real time. Collateral for counterparty risk would be less necessary. Real-time settlement would lead to reduction perhaps and elimination in some of these collateral requirements, a reduction in the money that sort of clogging up the plumbing of the system, and that would have avoided some of these problems altogether.”

Is GameStop a Buy, Sell or Hold?

Keith Gill, the man who turned $53,000 into multi-millions, is still bullish on GameStop – even at its present $45 range. Unfortunately, he was abruptly cut off before revealing why. Gill testified, “There’s a lot that has happened in recent months to suggest that GameStop could indeed turn around its business significantly. And one big element of that is, indeed, one of the largest investors in GameStop, Ryan Cohen. And he has brought in some colleagues that could help him turn around this company. And value could indeed…”

And value could indeed, WHAT, Keith???? While this testimony may seem like the ultimate cliffhanger, something tells me Roaring Kitty’s complete investment thesis can be obtained by joining WallStreetBets on Reddit.

Can Stock Lending be Democratized?

In his testimony, Griffin divulged that the annualized rate of lending out GameStop shares to short sellers is between 25-30%. That amounts to 1,725%+ more than the current rate of the 10-year Treasury note and 8,000%+ more than the average national CD rate. Hence, brokerage firms rake in exorbitant returns for lending out the stock belonging to their clients!

Herein lies both the injustice as well as the Decentralized Finance (DeFi) opportunity. In a DeFi environment, instead of the 25-30% going to the financial institutions, that substantial yield gets reallocated to retail investors who have the ability to lend out their shares to borrowers directly. In DeFi vernacular, this is referred to as “Yield Farming”, a rapidly growing area that enables cryptocurrency holders to monetize their holdings through DeFi lending protocols like Compound or Aave. Yield Farming can be very lucrative, and it is only matter of time before it makes its way to traditional equity markets.

Once DeFi becomes mainstream, not even a partisan collision will be able to stop retail investors from winning.