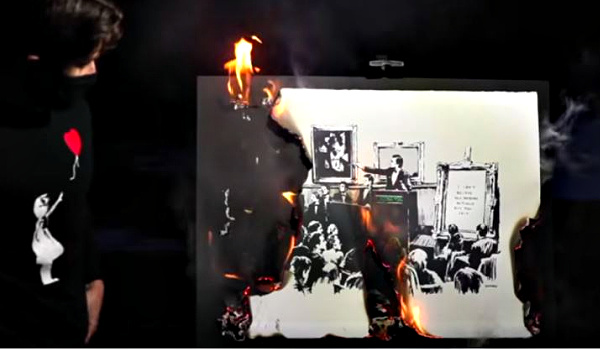 You may have noticed (or maybe not) a new “craze” in the blockchain sector focusing on NFT’s. First thoughts might just be “what the h*** is a NFT?” and “why all the buzz and why the h*** should I care?” Well let’s begin with what a NFT is. NFT stands for Non- Fungible Token. OK so far? Next, just like discovering what “the blockchain” was back a few years ago (remember Katie Couric’s infamous “What is internet?” moment?), knowing what NFT’s are will make you look REALLY COOL and up to date in conversations. And, why the buzz? ART!!

Let’s dig deeper. Tokenizing real assets such as real estate, gold, wine, etc. has been around for awhile now. Since there is standardization (one ounce of gold, one acre of land, etc.), these types of tokens are considered security tokens that can be traded or exchanged (fungible) among investors. Digital assets like Bitcoin, Ethereum, etc. are also considered fungible tokens since one can be exchanged for another and are actively traded globally. But NFT’s? Defined by Wikipedia;

“A non-fungible token (NFT) is a unit of data on a digital ledger called a blockchain, where each NFT can represent a unique digital item, and thus they are not interchangeable. NFTs can represent digital files such as art, audio, videos, items in video games and other forms of creative work.”

In other words, a Strauss waltz can’t be exchanged for a Hank Williams country classic. Non-fungible.

So along comes ART. And a truly bizarre moment. To ‘set the table’ so to speak, a NFT artwork is made up of two things. First, a piece of art, usually digital, but sometimes physical. Second there is a digital token representing the art, also created by the artist.

A little over a month ago a blockchain company, called Injective Protocol, bought a valuable piece of Banksy artwork from a New York gallery…………..AND BURNED IT. Live-streamed on Twitter no less. WHY? They claim they made it more valuable. WHY? Because it was sold as a piece of blockchain art. Now we have all heard that when an artist dies their work generally increases in value, right? (??) So if you “kill” (destroy) the artwork, it too would increase in value, right (??)

Here’s how “the Burntbanksy collective” explained it:

So, continuing that thought process, let’s say you bought a historic building (the New York Stock Exchange?), made it a NFT and…..burned it down. Betting that building (and token) WOULD NOT go up in value. Up in smoke, yes. Value, no.

Make sense? Is this CRAZY? Is it BRILLIANT? It is certainly BIZARRE. And to be honest, I don’t totally get it.

There are a whole lot more ‘deeper’ details but my head may explode.