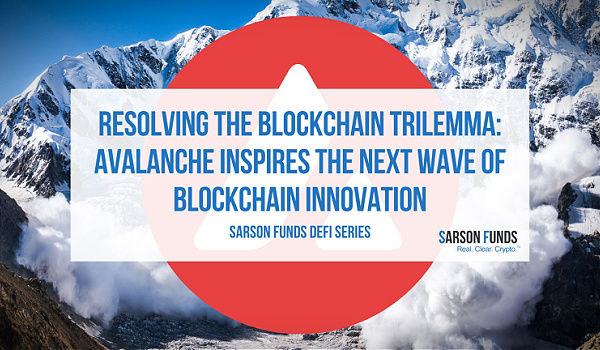 In this segment of the Sarson Funds Defi Series, we will take a deeper dive into the Avalanche (AVAX) blockchain. Avalanche was created in 2019 with a sole purpose in mind: to create the fastest time-to-finality blockchain in existence. Emin Gur Sirer, Avalanche’s founder and world-renowned computer scientist, aimed to create a network that effectively solves the blockchain trilemma, which is the notorious problem of reaching optimal decentralization, security, and scalability in a blockchain network. In this article, we will examine one of the most dynamic blockchains to date, discussing topics like time-to-finality, Avalanche’s three-pronged blockchain, and subnets, while also acknowledging a few of the network’s inefficiencies.

Avalanche’s aim upon creation was to make a blockchain eons above industry leaders in terms of “time-to-finality.” Time-to-finality is the time a blockchain takes for the transaction to be considered final and therefore irreversible. Whereas transaction speed (TPS) is the rate of speed at which data is transferred from one account to another, the differentiating factor between TPS and time-to-finality is the completion of the transaction. Avalanche’s time-to-finality is a single second. To visualize how fast this is in blockchain terms, it helps to examine the speeds of industry leaders. Bitcoin can take as long as 60 minutes, Ethereum usually takes around 1 minute, and Solana takes about 13 seconds. Avalanche remains well ahead of industry leaders in speed, which comes in handy when using Avalanche for everyday consumer spend. When crypto transactions meet mainstream adoption, a person will not want to wait 60 minutes to purchase a gallon of milk before they can leave the store, as would be expected using Bitcoin. This contingency is very unproductive and is a reason why having a quick time-to-finality is extremely important. This speed would not be possible if it were not for Avalanche’s 3 distinct blockchains that make up the network.

The Avalanche infrastructure is paving the way for future blockchains in the cryptocurrency ecosystem. The Avalanche network has 3 different blockchains that are all designated to perform specific tasks that aid in the various throughputs of on-chain transactions. The first blockchain within Avalanche is the X-Chain, serving the specific task of processing and creating Avalanche assets. Fees settled within the chain are designated in $AVAX, which is the network’s native currency.

The last blockchain making up Avalanche is the P-Chain. The P-Chain is built to allow users to create their own L1 or L2 blockchains based on Avalanche, called subnets. In simpler terms, the P-Chain is the network’s development layer, which allows for subnets to build unique renditions of the Avalanche blockchain that utilize its existing network of validator nodes. Subnet creation is unlimited, which is practical and idealized in theory but can pose some problems in the future that we will touch on later.

Avalanche uses a proof-of-stake consensus mechanism, which can be credited for why the network is so effective, scalable and secure. The network’s security is uplifted by the largest system of validators of any proof-of-stake protocol on the market, which helps Avalanche achieve such credible decentralization. As seen in previous examinations of proof-of-stake blockchains, a large and distributed network of validators is integral to achieving network decentralization and thus, security. As much as Avalanche has been industry leading in its technology and its speed, there are still some discrepancies that exist for the network.

One downside of this blockchain is the dynamics of its proof-of-stake consensus. The proof-of-stake consensus works well when promoting network decentralization, but Avalanche unfortunately does not punish nodes for malicious behavior. Punishments for malicious behavior when validating transactions in proof-of-stake networks are usually either a loss of the delegated amount of the token or loss of privilege to validate. The loss of a token disincentivizes fraudulent behavior, thus maintaining civilized order amongst the validators. The lack of punishment for malicious Avalanche validators poses a threat to transactional security for the network’s users, while also relinquishing its reputable security.

Another troubling aspect of Avalanche is its potential for network congestion, which occurs when blockchain scalability metrics like TPS and time-to-finality are maxed-out due to large amounts of network activity and demand for transaction throughput. As of now, the network processes 4,500 transactions per seceond. With an unlimited number of subnets that can be created, the more actively running on the network may weigh on network speed in the event that congestion occurs. Network congestion will increase Avalanche’s gas fees due to impending competition for transaction validation, and thus steer away users looking for cheaper alternatives.

While certain negative attributes are existent in every blockchain ecosystem, being cognizant of the value at hand is necessary. With Avalanche, it is clear the positive benefactors outweigh the negatives. As it stands, this network is one of a kind, and its active user base reflects that. Given its unique blockchain structure, Avalanche fosters an efficient processing chain that has led the way in redefining possibilities in the crypto ecosystem. With its unique infrastructure,  massive node network, impressive time-to-finality and low transaction fees, Avalanche achieves remarkable decentralization, scalability and security, and stands as a top competitor in the race to solve the blockchain trilemma. Avalanche has the potential to impact the broader ecosystem and will without a doubt pose a threat to layer 1 blockchains due to its various utilities. Stay tuned for the next segments of the Sarson Funds DeFi Series where we will continue to introduce blockchain networks that are redefining possibilities and demand your attention. 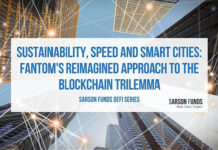