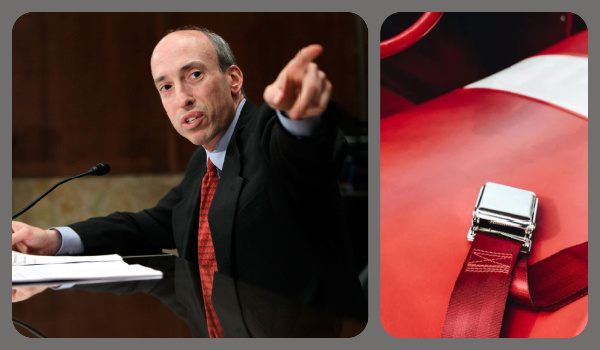 Well there ya go. Investor protection is as simple as wearing your car’s seat belt. At least that’s what Gary Gensler (Chairman of the SEC) implied in an opinion piece in last weekend’s Wall Street Journal.

Investing in crypto requires regulatory protection, just like the laws that require buckling up before you hit the road. Yeah, okay. Nice try, Gary. I know when I strap on my protective seat belt it will protect me IF I am in an accident. It doesn’t prevent the accident from actually happening.

That’s where the SEC comes in. The agency is supposed to prevent an accident (chuckle).

Certainly the question of how to regulate digital assets like cryptocurrencies has been debated for years now, but it seems an “accident” like the crypto selloff the past few months has JUST NOW caught the SEC’s attention.

So, with regulators like that, who needs them? Buckle up after the accident?

Now Mr. Gensler is probably much smarter than me since he went to Wharton and was a professor at MIT whereas I only made it through TCU (Texas Christian University……yup, a proud Horned Frog) but hey, I can at least see potential problems (accidents).  (Side note: bet the TCU football team can whip Wharton or MIT’s football teams. If MIT has a team let’s get them on the TCU schedule.)

But I digress.  So, maybe Gary has a plan to prevent accidents?

Here’s a good question for Mr. G. Why (really, WHY?) should the SEC be “the cop on the beat?”, as he suggested in his piece. The track record for the agency is not good. Remember Bernie Madoff’s ponzi scheme? Right under the SEC’s ‘nose’, Mr. Madoff defrauded tens of thousands of investors of over billions (BILLIONS) of dollars. The best part? The SEC was warned multiple times of the fraud (making up trades) and they were even alerted to purported trades executed on weekends and market holidays when trading was offline.

Or, how about the SEC-regulated securities debacles like Enron or WorldCom that were both traded on regulated exchanges and under……….you guessed it……..SEC oversight.

In Mr. G’s opinion piece he specifically singles out crypto lenders who, for a variety of reasons, caused a collapse of many firms that had attracted investor money by offering yields up to 20%. Were those firms offering securities? Maybe. Gary uses the SEC definition of what a security is so perhaps firms did violate that interpretation. It seems he is VERY well informed about how those crypto lenders functioned NOW…..after the “accident.” Where was the SEC a year ago when firms began offering those 20% yields? Another side note; when the Fed, or banks, offer instruments yielding 0%-1% and someone offers 20%, one can assume it ‘ain’t good.  But, in fairness to the SEC, no regulator can regulate human behavior.

So should the crypto sector be regulated?  By the SEC? Or, perhaps by a self-regulating organization such as the NFA (National Futures Association) which provides oversight that is in everybody’s best interest. Mr. Gensler encourages those same crypto lending platforms (that he ignored for years) to come in and chat with the SEC staff and find ways to work together. A big chuckle. Inviting firms to come in for milk and cookies (or beer and pretzels after five o’clock) is a meeting in futility. I know first hand working directly with ‘staff’ and getting guidance and direction results in frustration…….and nothing done. Again, why should the SEC be the “cop on the beat?”

Quoting Mr. Gensler’s last sentence in his opinion piece; “As with seat belts in cars, we need to ensure that investor protections come standard in the crypto market.” Who exactly are you regulating? The one not wearing the seat belt? The car manufacturer?  If the highest national speed limit is 80 mph do you fine manufacturers that make cars that exceed that?

Perhaps if the SEC (Mr G.) was really concerned about investor protection he would personally pick up the phone and call crypto leaders and invite them to a private conference meeting (here in Big Sky…..right up the road from us?) and gain some real insight. Check egos at the door. Or, quit trying to be the cop.

Fasten your seat belts when investing and don’t worry. The SEC is there to protect you.