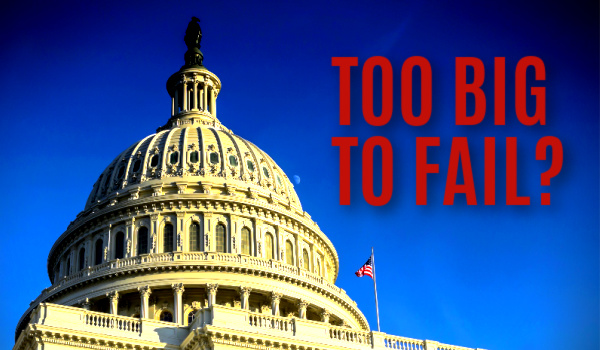 Update? Progress (?) report? Well, kind of. After running the article below at the end of just last December I thought it might be a good time to revisit. Times change.

Also, since last December, Russia invaded Ukraine. Will this be one of the “empires” (?) that actually fail? If so, how will that work out. With increased funding flowing to the Ukrainian war, increased spending flowing into entitlement programs and climate change initiatives, will the U.S. “empire” fail? Or, as the previous article said, “Is the U.S. to big to fail?”

Beginning this week, on the cusp of yet another interest rate hike by the Fed, things are getting serious. Stocks (equities) are going down. Bonds are going down. Gold is going down. Crypto (bitcoin) is (has) continued to go down. Real estate to about to go down. Political divisions? WTF. No hiding places? Is the U.S. failing? Are we actually to big to fail…..or not?

Just read the previous article and realize what can happen in just a few months.

(Thought: if you were an astronaut preparing to blast off, would you want the Fed in charge of your rocket?)

Nothing is too big to fail. Not businesses, not people, empires or even countries.

Sometimes it’s a slow “death,” sometimes it’s quick and messy and sometimes it’s a combination of those two. But one thing that is common in every failure is the fact that the events leading up to a collapse are very evident. The clues are right in front of everyone if they choose to look and pay attention. If you don’t pay attention you will be certain to fall back on the famous phrase, “who could have predicted that?”

So, what are we talking about? How about the bankruptcy of Lehman Brothers? The Lehman Brothers bankruptcy kicked off the 2008 financial crisis and the recession that followed. People lined up to buy houses (had to have check-in-hand), with little or no income verification, super creative investment products and OVER LEVERAGE. Exotic financial products were created (thanks Lehman) to finance houses. I mean, how could anyone miss that bubble? Lehman’s stock plunged 93% in three days and was deemed NOT to big to fail.

And during that crisis, the Fed claimed to have been caught by surprise by something that was clear to anyone who cared to pay attention. Bear Sterns followed but WAS deemed too big to fail, bailed out by the Fed and quickly sold to JP Morgan for pennies on the dollar.

Or, how about Long-Term Capital. Another costly miss by the Fed. Long-Term Capital Management (LTCM) was a large hedge fund, led by Nobel Prize-winning economists and renowned Wall Street traders, that blew up in 1998, forcing the U.S. government to intervene to prevent financial markets from collapsing. Once again the demise was fairly evident to all “street smart” traders that noticed LTCM’s strategy was highly flawed and an “accident” waiting to happen. Was the Fed even aware of what was going on around them? LTCM was also deemed too big to fail.

Let’s fast forward to NOW. The Fed certainly did not let the U.S. economy fail during the 2008 financial crisis (guilt for not foreseeing it?). but didn’t stop “propping it up” as the economy recovered. Unintended events began surfacing. Asset inflation, income inequality, rapidly expanding money supply, etc. All huge caution flags. Fearing deflation and concerned the economy would stall, the Fed ignored those caution flags. When the Covid-19 pandemic arrived, with mass lockdowns and employment disruptions, the Fed began pumping more money into the system to ensure the U.S. would not fail while, once again, ignoring the obvious unintended consequences it was creating.

Not to be an alarmist (but I am), remember Venezuela was once (up to 1999) one of the most wealthy countries in Latin America. Since 2017 the poverty rate in the country has been well over 90%. Was Venezuela too big to fail? No. It failed, a slow demise, but it failed. Brazil and Argentina are borderline, struggling with high inflation and huge debt. Now Turkey is in the process of failing…..quickly. A G-20 member, a NATO member and a country struggling with 20% interest rates, a currency collapse and super high inflation, Turkey is still holding on (for now) and actually advocating more spending with lower interest rates. Now is Turkey too big to fail? It’s a work in progress, but it WILL get messy.

I mention those because the Fed has missed (ignored?) all the obvious caution flags and has put the U.S in a precarious position. We can cheer(??) the U.S. being number three (yay, go #3) having the third HIGHEST rate of inflation in developed countries. According to a recent Pew Research report the U.S is right behind……wait for it……..Brazil and Turkey. Yes, the U.S. has the third highest inflation rate in the developed world. Are we in a slow failing mode? Is the U.S. too big to fail? The quick answer is yes…….or is it? Is maybe a better word?

Who bails out the Fed?

(Cautionary note: perhaps the Fed can negotiate the sale of the U.S. to China. Anyone know the NAV of the U.S?)