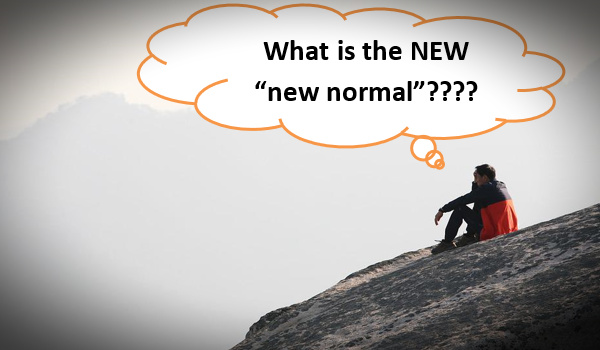 A whole decade (plus or minus) of getting used to “the new normal” and then in just a few months………..poof, all gone. In the relative blink of an eye. Now the “newest normal” includes inflation, shortages, recessionary fears, war and whatever comes along tomorrow. Gone are zero interest rates, Fed support of financial markets, pandemic stimulus checks and ever rising equity markets. WTF! I mean, you go to sleep for a few months and wake up to the realization that the new normal you had become used to is…………gone. And what’s this monkeypox thing? To that end, here’s a look at another post I wrote just a few months back and it’s still QUITE relevant today.

What exactly is, or was, the “new normal?” Going all the way back to the financial crisis of 2008-2009 (remember that?) when real estate and global stock markets collapsed a new paradigm emerged. Global central banks became heavily entwined in financial markets. Not that they weren’t before, but a “new normal” of a much higher level of direct government
involvement was born. Call it QE (quantitative easing), enhanced monetary policy or just plain old financial manipulation. Markets were assured of a “Fed put” to encourage and backstop risk taking. The “new normal.”

So, with an infinite amount of fresh money flowing into global financial systems by central banks it became a “no brainer” for investors to take on more and more risk. Asset prices began a multi year consistent rise. Eager to undue the effects of the economic recession and get back to the “old normal” of 2% inflation, global central bankers kept easing (and easing) through an entire decade (2010-2020). Investors got hard wired psychologically to believe that “buying the dips,” in equity markets believing the “Fed has our back” and that nothing could possibly go wrong had become the “new normal.”

Fast forward to just a couple years ago (wow) to the first part of 2020; Covid and a global pandemic. Governments declared lock downs, populations were confined to their homes and masks were mandated. Economies slumped BUT, once again, global central banks rushed to the rescue. Covid “relief funds” and programs were created with huge money distributions. The Fed kept up its easing and loose money policy to ensure a deeper recession (as in 2008-2009) didn’t happen again. The “new normal” psychology of the Fed “put” has been further entrenched in investor’s minds. Again, what could possibly go wrong?

Well, that “new normal” is fast becoming the “OLD new normal” and a “NEW new normal” is fast taking shape. Say what? The era of ultra low, or negative, interest rates are coming to an end. The era of weak inflation is also coming to an end. The end of the pandemic (hopefully) with accompanying lock downs are drawing to a close and working either from home or office is pretty well settled. So, what will the “NEW new normal” look like? Ah, anyone who says they know………doesn’t know.

How will markets (and people) react to persistent high inflation? Say inflation settles in at a 3.5%-4.5% rate. Will wages keep up? Will people’s standard of living decline? Where will interest rates be? To be over the rate of inflation let’s say rates become “normal” at 5%-6%%. In other words, for almost 15 years many investors and people have not lived in that environment. The “NEW new normal” is in uncharted territory. Oh boy. And don’t even think about geopolitical and domestic political uncertainties.

So, people will have to realize that the “OLD new normal” was very artificial. Economies and financial markets were ‘manipulated’ and people accepted that as reality. It was not. What is the real reality? Even central banks don’t know. They are still reacting to what was
created over the past 15 years. The “NEW new normal” may very well be daily uncertainty. Consistent uncertainty. What does that mean? Only that the “OLD new normal” is dead. Ready?