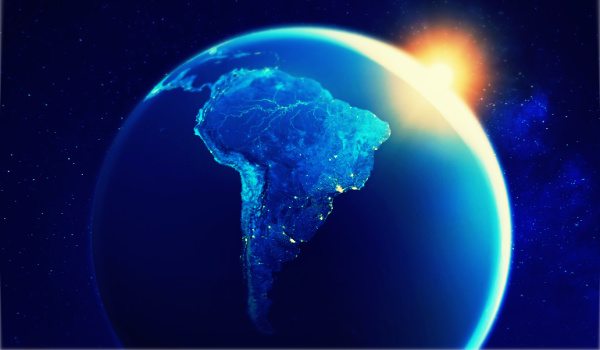 An “off the shelf” currency? Brilliant. Remember way back (actually 1999) to the time when the Euro was introduced after years of planning and dreaming? The goal of a European Union with its very own currency came true. A “United States of Europe” with a “European dollar” was finally born. A new global currency created from scratch. Cool. But that’s way too much effort. Is all of Latin America banding together (for a lot of different reasons) for the same reasons the Euro was created but adopting an “off the shelf” ready made currency? Hello Bitcoin!

The first “radical” step in adopting a new currency took place just a few months ago when the country of El Salvador made Bitcoin legal tender. People may not remember but in January 2001, the very same El Salvador gave up control of its monetary policy, abandoned the fixed exchange rate and “dollarized” the economy, thus making the U.S. currency in El Salvador legal tender. Panama, Ecuador, and to some extent Peru, followed suit and also “dollarized.” So El Salvador is a big deal.

Ah, but times and things have changed. A global financial crisis in 2008+, a global pandemic 2020+, the slow collapse of Venezuela from being Latin America’s most prosperous country, Argentina facing yet another financial crisis and on and on. But most importantly, the promises and expectations of “dollarization” in countries that did adopt the U.S. dollar just haven’t materialized. The advantages of lower administrative costs, a somewhat sounder financial sector and lower interest rates have not translated into being able to attract foreign investment (a/k/a jobs) and prosperity. Having given up monetary autonomy and becoming more and more vulnerable to foreign influence (including the IMF) is forcing a huge change.

Just as “dollarization” was supposed to advance participating country’s economic growth, the Euro was created to promote growth, stability, and economic integration in Europe. But, ONE big difference. Getting each European country to adopt the Euro (and join the EU politically) is like herding a pack of cats. Difficult at best. But every country throughout Latin America can adopt Bitcoin (an “off the shelf currency”) AND address their individual country’s needs without sacrificing sovereign autonomy. El Salvador’s agenda differs greatly from Argentina’s which differs sharply from Venezuela’s which doesn’t relate to Brazil’s economic goals. But adopting Bitcoin across all Latin America would certainly benefit all. El Salvador is already proving that.

El Salvador, having adopted Bitcoin in September as its official currency, plans to establish dozens of schools and animal hospitals after profiting from Bitcoin ownership. Additionally, three million people have downloaded the Chivo Bitcoin wallet amounting to 46 percent of El Salvador’s population. By contrast, as of 2017, only 29 percent of Salvadorans had bank accounts. The “un-banked” are becoming “banked.” Other countries have taken note. Brazil just passed a new law allowing workers to accept Bitcoin as salary as a first step to making BTC legal tender. Adopting Bitcoin may actually help lift millions of Brazilians out of poverty.

Venezuela and Argentina are taking note as well. The government and crypto creators have been working to stem the downward spiral of Venezuela’s official currency using digital tokens. Again, hello Bitcoin. The President of Argentina, Alberto Fernandez, is “open to adopting Bitcoin as legal tender to fight inflation.” The country’s need for a hard store of value such as Bitcoin is readily apparent. “They say the advantage is that the inflationary effect is largely nullified,” President Fernandez explained. It certainly appears all of Latin America is on the cusp of forming a huge trading block using Bitcoin as its common currency. In other words, who needs the U.S dollar and ‘beholding’ to U.S. Fed monetary policy?

Last, an interesting note; The Euro was introduced as a VIRTUAL CURRENCY in 1999. Paper notes and coins came three years later. First European country to use the Euro? The Netherlands. A small country…..just like El Salvador. Hmmmmm. Sound familiar?

Bill Taylor is a frequent contributor, and CEO of Digital Wealth News as well as Chief Investment of Entoro Investments